A walk through any major city in the world will show just how widespread the use of steel is in the construction of skyscrapers. Even where buildings have a concrete structure they are reinforced by steel, which allows the walls to be built higher than they could be in concrete. In modern skyscrapers where the exterior walls are largely glass, this is afforded due to the strength of a steel frame.

Some of the most famous buildings in the world are made of steel, and many of them are still standing tall almost a century later – proving the immense strength and durability of this material.

The Eiffel Tower - Finished in 1889, this is one of the most instantly recognisable steel structures in the world. Originally built for the 1889 World’s Fair, it was only intended to stand for 20 years, but proved useful for communication. More than 120 years later it is probably the most striking cultural symbol of France. The Chrysler Building  - The world’s tallest building for just less than a year, the Chrysler Building is one of the most recognisable of New York’s skyscrapers. A tribute to art deco, the steel frame supports stainless steel cladding at the upper floors in a radiating sunburst design. Willis Tower, Chicago – Currently the tallest building in the United States,  the Willis Tower has a bundled cube structure which further strengthens the steel frame allowing for its staggering 108 floors. In fact, the planned height of the tower was restricted by the Federal Aviation Administration to accommodate air traffic over the Chicago skyline. In these five buildings we can see the sustained popularity of steel in architecture all over the world from the 1880s through to today. Strength, durability and versatility are the key qualities of this material which allow architects to push the boundaries and create the skylines of the future. 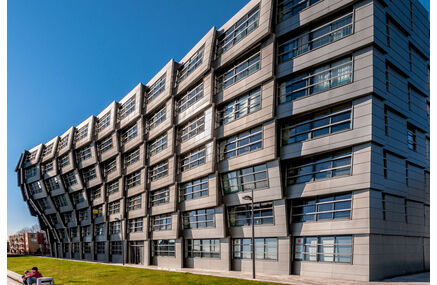 Five Famous Aluminium Buildings Around The WorldThursday, 6th of February 2014