A Huge Accident: The Story of Stainless Steel Discovery

Humans have been using iron since around 2000 BC and it served as the most used and utilised metal until steel production became efficient and reliable enough to allow it to become a viable replacement shortly after 1870 AD. But the means by which to develop steel has always been found inherently in the process we use to treat iron, which has meant that throughout history steel production has occurred completely by accident.

Due to the method by which the Ironsmiths of the past converted the iron ore into a useable material that would suit their purposes, the iron would absorb a small amount of carbon into itself. The absorbed amount was not particularly great, with the end result only containing an average of around 0.05% carbon, and it did in fact help the keep the metal malleable while under heat, and gave it some added resilience after being shaped. Known as Wrought Iron, it was one of the most used metals for between 3000 and 3500 years, until the emergence of Cast Iron.

Cast Iron could only be made through intense heat, the levels of which could not be reached in a smith's forge, so it had to be made in a Blast Furnace, the first of which came about between the 12th and 15th Century. The heat of a blast furnace would actually cause iron to melt, rather than just making it soft and porous, which would in turn allow it to absorb far greater levels of carbon. The levels of carbon in cast iron could reach anywhere from 2% to 4.5%, and once hardened it was very hard, on other hand however it was also relatively frail and it could be cracked or even shattered if a great enough force was applied to it.

Steel is essentially a balance of the two types of iron; it is produced in a blast furnace, same as cast iron, but is processed to reduce the level of carbon to between 0.2 and 1.5%. This means, amongst other things, that steel benefits from the hardness of cast iron while not suffering from its fragility. Due to all of its qualities, plus the difficulties of its manufacture, steel was initially very dear to produce and it could only be done so in small quantities, and this was the case until well into the 19th Century.

Despite the numerous complexities that go into its fabrication, there have been incidents of steel being produced accidentally throughout history. One such example would be what has become known as Damascus, Saracen or Wootz Steel, which was generally used in the development of swords and knives. Wootz steel was being utilised in India as early 300 BC and elsewhere possibly as late 1700 AD, and weapons crafted from the material were characterised as having high levels of durability and strength as well as extreme sharpness, which was reputed to have been able to cut through standard iron swords, as well as slice a hair in two should it fall across the blade, though this was likely an exaggeration.

It has been suggested that the ability to make such strong weapons did not come from the ability of the smith, but rather as a result of a particular type of iron ore that contained levels of impurities favourable enough to allow Wootz Steel to be produced. However the supply would have been finite and the desired outcome would not have been guaranteed; as a result of its high carbon content, there is a good possibility that a good deal of the raw materials were wasted on accidentally creating cast iron, which would not have even survived the forging process.

Jumping ahead to the early 20th Century, another type of steel, one that is used in abundance today, was discovered by pure chance. In the attempt to find a way to reduce the damage done to the barrel of a gun when discharging a round, a metallurgist, named Harry Brearley was running tests using a number of steel alloys. His experiments had turned out fruitless, and none of the alloys were reducing the level of damaged caused to the guns barrel upon firing.

Much like the discovery of penicillin, the only reason Brearley made his discovery was because he had not fully disposed of the remains of his failed tests, and sometime later he observed that while all the other samples had begun to rust, one had not. This alloy contained in it high levels of Chromium, as well as iron and carbon, and was named Rustless-Steel, and eventually re-named Stainless Steel.

Where Did Blacksmithing Get Its Name? (And Other Facts You Didn't Know)Friday, 31st of January 2014

Blacksmiths. Most people have heard of them, the majority know roughly what they do, yet hardly anyone has seen them in action. Although an essential job, the role of a blacksmith is not one that people in the modern era are overly familiar with. A simple 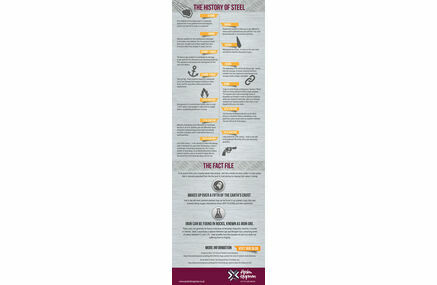 Infographic: The History Of Stainless SteelWednesday, 24th of September 2014

A little under a year ago we published an article on the History Of Stainless Steel – starting a little over 5000 years ago, at the advent of widespread iron use, and leading all the way up to the discovery of stainless steel in the early 1900s.